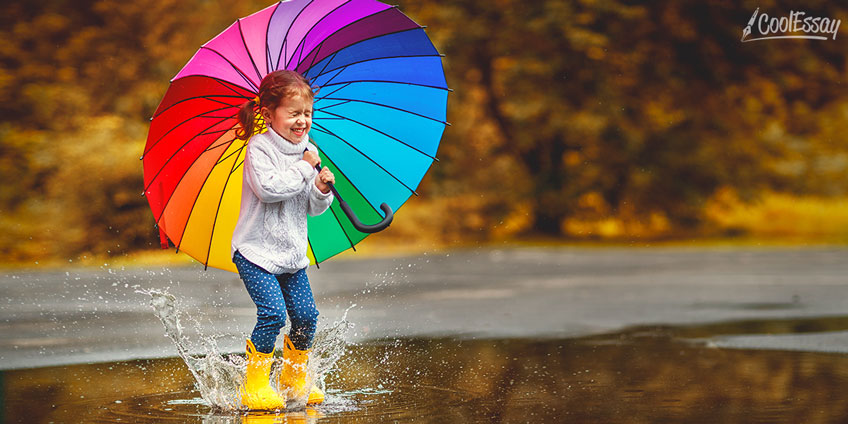 British weather is excellently illustrated by Mark Twain's wonderful observation: "The climate is what we expect, the weather is what we get as a result".

It is said that in the area of Liverpool, you can count for up to 136 weather variations in 24 hours in March. It is not surprising that it is quirks of climate that occupy the leading place in the British world picture.

Today we will digress from the stereotype of talking about the weather as an indicator of friendliness, courtesy and the means of filling out tense silence and turn to how weather phenomena affected the attitude of the English. What parallels do the British hold between events of human life and meteorological events?

Since the main characteristic of the weather is its extremely erratic and inconstant character, the British equate it with luck in gambling and short-lived romantic attachments. True, sometimes they make even more philosophical conclusions:

After a Storm Comes a Calm

This proverb dates back to the 14th century and underlines the key feature of the British character – the ability to stoically wait for "storms", firmly believing that after trials will come peace of mind or at least a breather. Nevertheless, even the most persistent people sometimes complained that

Just as one can never predict the rapid deterioration of the weather, one can not foresee where fate will strike the next blow. That is why the British cultivate a foresight. This is the only way to remain fully armed, whatever happens.

For example, there are many interesting expressions that play up the following: an intelligent person wears a raincoat in any weather, whereas a fool remembers about it only when it rains. This is a classic example of English forethought. It is better to take inessential items with you and have a guarantee that you will not at least get wet, than rely on luck and walk tensely, all day. The English prefer not to refer to the theory of probability, they will be much more relaxed if they are overcautious, even if it causes them certain troubles or inconveniences.

The rain in the British Isles is embodiment of unpredictability of the climate and, at the same time, the most common weather phenomenon that accompanies every Englishman daily and becomes an integral part of their way of life. They say that

Rain Must Fall into Life of Everyone

The wording can be different, but the meaning does not change. Rain, in this case, is seen as an analogy of trouble, problems, anxieties that cannot be avoided. However, it is okay, because after any rain the sun comes out.

Many are obsessed with negativity. Some simply cannot stand all adversities themselves. It seems that troubles follow one after another and this sequence gradually becomes infinite. Then they say

First It Rains, Then Downpours

Here philosophical attitude to life comes to aid. If it downpours, it means that it is necessary at this stage and you just have to wait it out. In addition, you can find a lot of positive things in any downpour, if you want to do this, of course.

From ancient times, rain is considered an indomitable and powerful element, which determined the fate of seafarers. Proceeding from their observations of the clash of elements in the open sea, proverb appeared:

Here we can clearly see the attitude of the British towards the rain. This is no wonder, because rain is an integral part of their life and country.

The wind as an element appears in many other proverbs, inspired by the most weather-dependent shipping business, for example:

Raise Sails When the Wind Blows

The wind in English proverbs also acts as an assistant to a human in daily duties, and as a symbol of uncontrolled destructive force.

Who Sows the Wind Will Reap the Whirlwind

This proverb of biblical origin emphasizes that any act invariably triggers a chain reaction of consequences. Involuntarily contrite heroes of Victorian Gothic novels come to mind, tormented by remorse. Usually, scenes of torture are accompanied by thunder and a storm, for it is not for nothing that

If you are not tormented by conscience, then your sleep will be calm, even if the storm is raging. If not, then thunderstorm will be depiction of what is happening in a person's soul. It may seem that nature is indignant about your unclean conscience and is trying to point it out to you.

Thunderstorms for the British, despite all their dramatic nature, have already become a familiar phenomenon, which can sometimes be treated with some indulgence:

When Peals of Thunder Are Loud, There Is Very Little Rain

It is something like "barking dog seldom bite". Most of the large-scale events occur quietly, without much noise. Englishmen perceive noise as an unnecessary attribute and waste of energy.

Even the most raging storm ever fades away, and even on Albion, you must not despair because of bad weather, because it is likely to deteriorate completely, or suddenly it will clear up:

Rain Before Seven, Clear by Eleven

This proverb is usually mentioned speaking of someone who is characterized by impetuosity, unreliability and changeable mood. One also says that it is one thing one day with someone and something else the next. Nevertheless, in spite of the fact that some of traits of our relatives may not suit us, it is important to remember:

Weather, Husbands and Sons Come as They Are

Since the weather, like character of a person, cannot be changed, it is necessary to reconcile and live with it, having adapted to its peculiarities. It is no coincidence that they say:

A Bad Farmer Curses the Weather

The easiest way to explain bad harvest is the bad weather. And maybe this is not true?

So do not blame the weather forecast for your failures, remember that there will be bright days in any case.