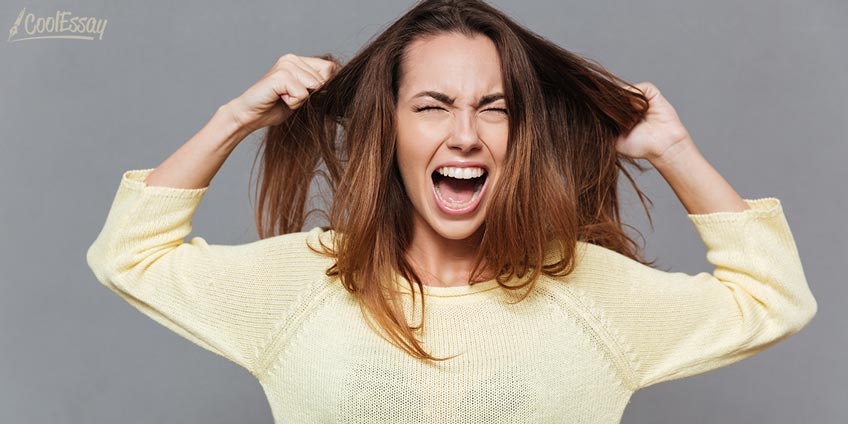 Unfortunately, our life consists not only of pleasant moments, and from time to time we all experience negative emotions – anger, irritation, discontent and so on. And although it is not always pleasant, it is still necessary to express such feelings.

So, let us first consider the most common adjectives, which are used in English to express anger. Probably the first thing that comes to mind is angry. Indeed, this is a very common word, so the easiest way to tell someone that you are angry with him is:

I am angry with you!

They are angry with him because he had food for the banquet, but he forgot to bring it on time.

Pay attention, angry with or angry at, but not angry on.

It is very noticeable that she makes him mad.

You cannot be mad at him forever.

However, do not interpret this word so literally. Among other things, it is an excellent synonym for crazy, and as literally – as mad hatter from Alice in Wonderland, and figuratively, for example madly in love.

If you have heard the word "fury" – a grumpy woman (and another goddess of vengeance in ancient Rome), then here is a related word – furious:

Why ask me why am I furious? You perfectly know the reason!

Another variant is incensed:

There is also the word rage, from which we get the adjective enraged. This word is more emotional and should be used cautiously:

People are enraged by the fact rally was canceled.

Another beautiful expression is go berserk, this is when the angry begins to destroy everything around. It is no wonder, after all, this word came from Berserker – so the Vikings called the brave and "crazy" warrior. To see red is another name for this state. With a modern, non-Viking world this phrase is used, fortunately, in figurative meaning:

As soon as we announced that the restaurant was closed for special services, visitors went berserk with their demands to let them in.

There is another synonym for fans of rocket science – go ballistic. Blow, broach – and your anger carries you like a ballistic missile.

People went ballistic when they found out that there would not be a performance. Is it possible to be so mad? After all, organizers returned money to them.

We do not start angry right away. First, we try to hold back, but if the stimulus is strong, then our patience is running out and a person runs out of patience:

I am a very reserved person, but that time I run out of patience.

She acted as if she wanted to fill his cup.

Another great expression: it is the last straw that breaks the camel's back. This is an Arabic proverb that has become a popular expression. The full expression is rarely used, but it is broken down in parts: the last straw, to break one's back.

This expression was the last straw.

Can you stop talking on the phone when I drive? Do you want to break my back and get into an accident?

Be at the end of one's tether – another expression from the same series:

They always try to be calm, but this time they were clearly at the end of their tether.

If something is annoying, then you can use the following phrase – it is getting on my nerves:

You keep silent all the time and it is getting on my nerves.

The phrasal verb be fed up with is often used to convey irritation. If there is something very annoying and that angry you, you can say:

I am fed up with doing this stupid work!

As for the gusts of anger and rage, there are a lot of expressions: to have a fit, to go off the deep end, to go spare. There are several idioms with the verb drive, which in these contexts means "bring to some state", in our case to the state of irritation or anger. All expressions are translated almost equally: drive someone up the wall, drive someone to distraction.

Their chatter drives me up the wall.

Rub someone up the wrong way – imagine a cat that someone is stroking against the hair:

Do not ask her anything about work, it rubs her up the wrong way.

Put the cat among pigeons – to do or say anything that irritates or disturbs others:

I turn up the radio but I did not know that it was a step to put the cat among pigeons.

Give someone a piece of one's mind – when you want to criticize someone, express your anger:

In the end, all this bothered me and I gave him a piece of my mind.

And when words no longer remain – use interjections: Argh!