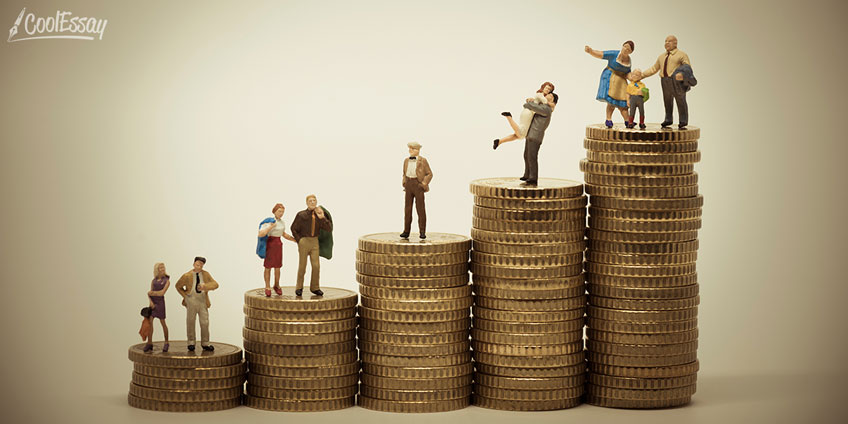 Today we are talking about an important sociological question that worries many people. It can become both an interesting material for a study, and a topic for an excellent college paper.

One of the useful forms of the classification of the social hierarchy is its division into the rank and class types, which spread in American sociology in the 1950s. The rank system of inequality corresponds, as the name implies, to a fixed system of ranks. The nomenclature of the ranks is known. Distinctive features of each rank are known. They are mutually exclusive: one cannot belong to two ranks at once.

In modern societies, the rank system covers only a certain sphere or some part of human life, usually associated with work or profession. It is clear when a captain must obey a major, and when not. It is clear how a major can be recognized: by the number of stars and by the kind of stars we see on the shoulder straps. It is clear what will happen if you put on major stars not being a major, and try to command a battalion: the power of the law will intervene and punish anyone who misappropriates someone else's rank this way.

The class system is not like that. Classes are fluid and amorphous communities. We know that they exist and that they form a hierarchy: people differ in riches, reverence, prestige, and very often one accompanies the other – some have everything, others have very little. We take into account its existence, making very many vital choices (for example, who to be friends with or who to marry, who to offer friendship and heart to, and who obviously will not want to have anything in common with us).

Classes and Their Symbols

In the case of classes, there is no law that determines how many classes exist, what these classes are, who belongs to which class, how it is necessary to distinguish these same classes, what punishment will be given to the one who has presented himself or herself as a representative of the wrong class. In a sense, the law even denies their existence. Everyone is equal before the law. Most laws are based on a constitution that erases such qualitative differences between people.

Accordingly, unlike with ranks, we cannot find any precise, reliable, and well-known way guaranteed by the force of law to determine who belongs to which class. In fact, we will see later that classes resist any attempt to give them a rigid definition by their nature.

Sociologists, especially Marxists, but not only they were seeking to find some analytical definition of a class that would capture the basic attribute throughout the XX century, ultimately determining who belongs to which class. But each time it turned out that, whichever definition you choose, it leads to an obvious absurdity when applied to the specific situations.

The classical Marxist definition points to the ownership of the means of production as the main attribute determining the class affiliation. There are many papers confirming and describing this. But if we tried to rigidly follow this definition, it would turn out that a worker who received one share of his or her enterprise automatically became a capitalist.

However, in the 1960s and 1970s, many capitalist enterprises were distributing shares to the workers in order to somehow make them feel involved and, possibly, overburden the life of socialist agitators. Did the class system change from this? Unlikely.

In the final analysis, as often happens in sociology, we come to the fact that the class to which an individual objectively belongs is a class whose representative he or she is considered to be by the surrounding people. Thus, the class affiliation is a collection of status signals read by others.

In this sense, the study of the class structure is the study of how people orientate in it, how they distinguish who occupies which step, who is higher, and who is lower, and how they, in turn, study how other people are guided in it. In a sense, trying to understand their relative position, they do the same job as sociologists, trying to understand how other people build a relative hierarchy.

It is pointless to prove that I objectively represent a class A if no one is ready to admit me for such one; therefore, it is important for me to understand what signals the others are reading. And to completely confuse everything, the very ability to read signals is a class symbol, and, as we shall see, one of the most reliable and important ones. The fact that you correctly read the symbol already defines you as someone standing on a particular level as well as the fact that you have not noticed any other symbol.

All this does not mean that the resources that an individual has – money, for example, or origin where it is considered important – do not matter for determining his or her class affiliation. But they are ultimately only resources to make an impression of this belonging, nothing more. And they are no more important to the final result than the art of controlling the impression.

The first large study of both the social class and its symbols seen from this angle was undertaken in the 1940s by an American sociologist named William Lloyd Warner, who examined the small New England town Newburyport with about 12,000 adults. This was one of the most large-scale sociological studies that had ever been conducted.

All 12,000 people were interviewed, many not once. Warner wrote five huge volumes, one of which was a giant table indicating the class affiliation of all these 12,000 people. He had many talented students, and some of them were much more talented than Warner himself or at least left a much deeper trace in science. One of them was a Canadian-American sociologist Erwin Goffman, who, like all the graduates of Warner, needed to learn to distinguish the class affiliation by a single look.

Warner had a scheme of six classes, which, he believed, distinguished people: higher-higher, lower-higher, and so on to the lower-lower. As a practical work, his graduates needed to learn how to determine the class of an individual by the signs corresponding to this class. Graduates were supposed to enjoy these assignments.

But Goffman went farther than just cataloging the signs. He tried to understand how the very process of identifying a class on the basis of its symbols determines which signals will turn into class symbols and which ones will not, and introduced one opposition, one distinction that is extremely important for all his profound heritage. This is a contradistinction between the information transmitted and given out.

Read the continuation of this article on the coolessay.net website blog.