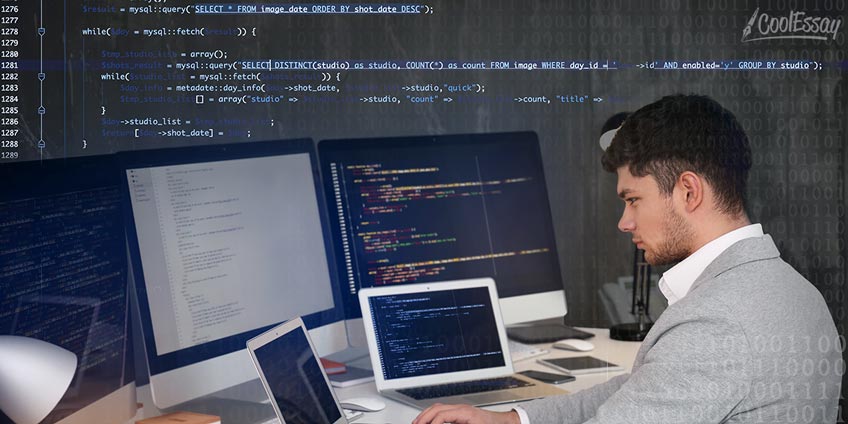 Programmers, who plan to develop their skills and keep them up to date, should at least understand the English language. This, however, refers to specialists in any field.

And, despite this seemingly obvious fact, many novice programmers ignore it. "Why should I do this? After all, there is so much Internet around, which will teach, show and offer work".

"The position of the caveman!" – we answer. This approach leads to degeneration, because stagnation begins without the influx of new knowledge from outside. Development is carried out only at the expense of those who are not cut off from their colleagues and communicates with those from around the world. They occupy the top of the food chain, and carry the light of knowledge to the masses.

We can still agree with the argument that most of the IT terminology is already taken from the English language and is understandable to every programmer. But there are much more reasons for which the developer will need knowledge of English. We will reveal them right now.

The most basic and prAimitive level. Even if you do not understand what is written, you should avoid using interfaces in your native language, if it is not English (we consider this option by default). In any case, you will remember the familiar words of the items of those menus or another, and you will intuitively understand what they are doing.

But if you use the interface in your native language and you need help at some point, then you will come across the fact that you do not understand what people write about in the guides on the forums, because all the items are written in English there, and what kind of analogues exist for them in the localized interface – try to guess. As a result, you will try to find guidance in your language (if it exists) that discards you to cavemen.

So, switch all your software to English right now.

In general, all technical documentation for all programming languages is compiled in English. Why? So that everyone understands it.

It is enough to cherish illusions that an intelligent person from the top of the food chain will translate the documentation for you. Even if he or she does, it will take so much time that by the time he or she finishes, the next version of the language with new documentation will be released.

This level is not difficult to achieve if you set a goal correctly. You automatically cut out a whole layer of studying, which will definitely not come in handy now, like the difference of pronunciation, and concentrate on updating the vocabulary.

Searching for Solutions on the Internet

When the documentation did not help, and it is embarrassing to go to team-leader, the collective mind also known as the Internet comes to the aid. And here many of us make the mistake of formulating a search query in our native language. Thus, we cut off most of the available knowledge and solutions, and search only among those who write in our tongue. While the whole world communicates in English.

It is worth asking: where are we more likely to find the right solution? Among the programmers of the whole world who communicate with each other in the same language, in which the documentation is written, or among those who, just like you, are waiting for the translation in a clear language?

In general, you need to accept that the programmer community speaks English. A lot of programmers publish their wonderful articles. They are always more relevant, because they are written, so to speak, while the trail is still warm with experience of a particular developer. And the quality of the material in English is simply better.

There is no reason to translate this into all languages of the world, including your own. It is not necessary to hope that someone will translate something for you for no reason. Here, by the way, another reason emerges.

Professional and near-professional literature, just like articles, is written in English. Not because it is focused on the English-speaking audience, but because it is focused on the language of professionals. Professionals from all countries of all regions communicate with each other in English. Therefore, they also read books in the same language. Such a text will be understood by all at once, which will greatly facilitate communication and augmentation of knowledge.

Conferences, Online Reports and Other Webinars

Since we have already found out that the community of professionals consists of people of different nationalities, it is true to assume that in the moments when they come together to publicly talk about things that are vital, they do it with the help of a language that everyone understands. Not all do it well, but it is still better than if they performed in their native language, and no one would understand them.

Most often, it is here that the most interesting things happen in any professional environment. Why, you think, for example, are TED conferences so popular?

Of course, one has to work hard to perceive English speech by ear. But the acquired skill will very quickly be recompensed, because it is here where the expansion of the boundaries of your possibilities will begin, which will lead you to the last point in the end.

And, knowing English you get the opportunity to live and work anywhere in the world. Why? Correctly. Because professionals speak English. And even if everyone around you speaks a gibberish, the professionals with whom you will contact and who have hired you will speak with you in English.

The international labor market is huge and constantly needs new staff. In the coming decades, this trend will only intensify and there are quite a lot of places on this feast of life. But only those who know English are admitted there.

In general, if you seriously expect to develop as a professional, and plan to build a successful programmer's career, you cannot do without knowledge of English.

In addition, here we are talking only about things that affect the professional part. And we simply bypass the gigantic area of opportunities that open in front of the native speaker of English in everyday life. There are a few tens of points, from entertainment and serials to freedom of travel and acquaintance. But here, perhaps, you will motivate yourself no worse.