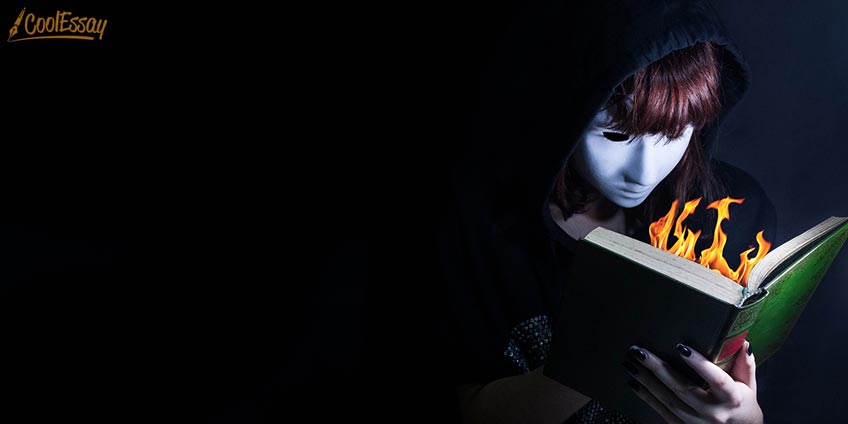 This is perhaps the best of Bradbury’s major works. The story depicts the dystopia society of the future, and in fact – our reality brought to the point of absurdity. The author came up with a state where it is legally forbidden to read and store books. For the sake of political correctness and general tranquility, the general level of spiritual and intellectual demands of citizens is artificially understated. But there are rebels and fugitives.

This is one of the rare science fiction works of Bradbury. Very exciting, touching and very lively and dynamic at the same time. With a relatively simple plot, the text is full of allusions, including biblical texts and complex symbols.

The History of Writing the Novel

In 1934, Ray lived in Los Angeles and watched at least 12 films a week. One broadcasts newsreels before each movie, which deeply shocked him. Grainy black and white frames flew before his eyes, on which the fascists tossed books into flaming fires, and this sight left a burnt mark in his subconscious. Ray sat, washed by the light of the projector, the flame reflected in his round glasses, and tears rolled down his face.

During the Great Depression, books – and especially free books from the public library – were his only consolation. In 1966, in the preface to "Fahrenheit 451", Ray Bradbury wrote that when Hitler burned the book, it felt like he was killing a human.

This is the world in which one would not like to find oneself, but which, unfortunately, becomes more and more similar to our own. It is inhabited by people who are not thinking and feeling, but by consumers who are not capable of deep feelings and original thoughts. Otherness here is considered a crime, people are constantly monitored, and those who begin to think too much and ask unnecessary questions soon disappear forever under the wheels of an indifferent administrative machine.

People have forgotten how to talk about important things and hear each other, all their conversations are devoid of essence, they have forgotten how to feel. Most of them spend time for meaningless games, travel around the cities on high-speed cars and watch empty and endless TV shows, from which one cannot make any specific ideas. Art has become completely abstract, it treats the uninformed public with special effects, silly jokes, chewed up remnants of long-forgotten great ideas.

People became coarser and angrier with each other, marriages became an empty formality, because husbands and wives are not interested in each other at all, people are indifferent to other people's deaths, losses. There is a war somewhere far away, in which their country participates, but no one cares about its victims. The whole life has become a game for them, the main thing here is not to stop and not to think about anything, hurry to have fun without noticing the pain around oneself.

We live in times of high technologies, which sometimes replace real communication with real people, and in times of hassle. The pace really accelerated. We race along with it, becoming hostage to a crazy race. In modern society, everyone has a lot of responsibilities, which people try to fulfill as quickly as possible, because we have an endless stream of cases. We are always busy. Always. And in order to succeed, humanity decided to simplify many important things for our lives. In fact, it is easier. And it is scary. It is scary to realize that this is true. At the same school, we need to master a large amount of information as soon as possible. And we resort to reducing or even immediately to the denouement, the answer…

In general, education is a strange thing in our time. You seem to be learning, a lot of information is pouring into you every day. But is it necessary? We are like stupid pupae, dummies. One fills our heads with facts that, when not being used in practice, are forgotten, and new facts come to their place. An endless, unnecessary chain of information.

But knowledge is another matter. A person needs it to think. But how not to get lost in unnecessary threads? This is the problem of our time that is also described in this novel. The book repeatedly mentions that people try to remove stress, aggression after work, study and the endless flow of senseless information.

Perhaps the most terrible thing in this novel is indifference, loss of values and containers, where what we are afraid to forget is stored. Bradbury not only warns us about the threat and poses before us questions that give us food for thought, but also gives us answers. Throughout the reading, it seems that this book is the author's message, his thoughts, his worldview. He instructs us on the right path and follows it with us at the same time. He teaches us to leave a grain of ourselves in this world and not be afraid of mistakes, but, on the contrary, remember them so that the troubles do not recur.

Transformation of the Main Character

The main character of the novel is Guy Montag, one of the firemen. In the beginning, books are of no value to him, he is happy to see how they are burning, admiring the flame, the "fiery salamander", believing that he is doing the right job, not knowing that once the firemen had to put out the fire and not kindle it. However, Montague is gradually changing, he meets those strange people for whom books are not just paper, who are ready to give their lives for them, burn with them or fight for people to get the knowledge they have. Guy himself breaks the rules, he becomes interested in what is said in the books, what is so important in them and whether one is telling the truth that they have nothing but incomprehensible nonsense that drives people crazy.

This is the remarkable story, comparatively small in volume, but extremely curious, containing many important and close to many people thoughts. This novel is especially close to those who are equally sensitive to art and books, who are related to Bradbury. Among the many existing dystopias, this is perhaps one of the most believable. But, unlike Orwell's "1984" or Zamyatin's "We", there still remains some hope of revival for people, because there are heroes who understand the value of knowledge, books, life itself, able to save the texts in their head and pass them on to those people in the future who will be ready to receive them.

The unusualness of this version of dystopia is also that people, in general, live quite well by usual measures. They do not suffer from hunger and cold, they have everything they need, they do not only have that which makes life valuable. Therefore, no one is surprised when the neighbor tries to commit suicide for nothing. And few people care. The keepers of books here become apostles of the new teaching, like the apostles of Christ. Their mission is to revive the world after a big war, to convey what is left of the past. It is not by chance that one of the books that heroes manage to hold in memory is the Bible.

Message of the Author

It would be ridiculous to claim the truth of the assumption of the author's message. As always happens with good books, every reader makes the own conclusion, gets the own lesson or does not get anything.

But there's something one can definitely say about. Destroying the roots leads to physical and moral death. And if physical death can be slowed down by resorting to artificial methods, then moral death is irreversible. Culture, values of centuries, the heritage of ancestors – here it is, the right way. First, one person will think about it, then a family, a city, a country. Together we are power. Maybe this is the way out, the way to change the world that is rushing to destruction…