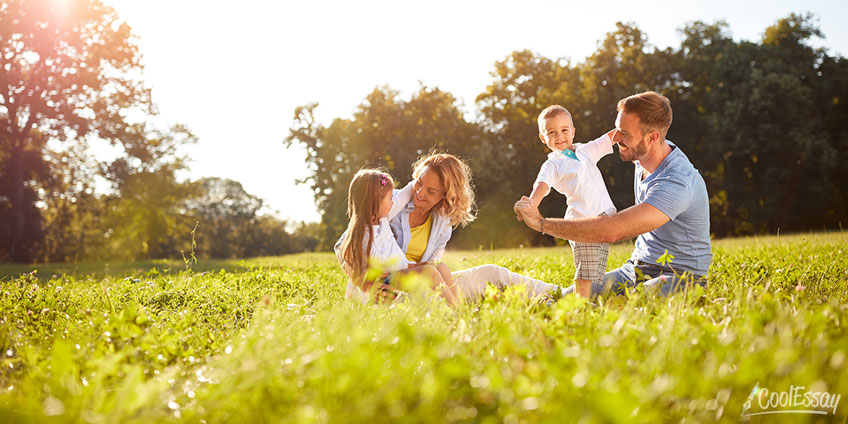 Having received an assignment to write a paper on a similar topic, you should be aware that this is not mathematics, not physics and not other exact science. Such topics require not only availability of information, but also your own reasoning. If such thing is not available to you yet for any reason or you do not have time, read our article, it can give you at least food for thought.

We are talking about a small social group whose members are connected by marriage, parenthood and kinship, commonality of life, common budget and mutual moral responsibility.

However, do we always think about questions:

The number of divorces increases every year. But again, new marriages are being created. What is it? Why do people get married?

To answer these questions, we will consider them from different points of view.

We are talking about one of the oldest unions. It arose much earlier than religion or state, army, education or market. The basis for understanding the reasons for encouraging people to unite in groups and to create sustainable links and interactions are the needs of people.

The structure of human needs is as follows:

Using the presented structure of needs, let us try to comprehend the nature and social functions of a family.

Let us start with the reproductive function. It performs two tasks: public – maintenance of the average number of population, and individual – satisfaction of the need for children. It is based on satisfying the physiological and sexual needs that motivate people of the opposite sex to unite. It is not only the basis on which a marriage is built, but also the main reason for moral intimacy.

By the strength of the impact on stability of relations, it is even stronger than such a factor as consanguinity. A man and a woman look for each other precisely because they are different. Each of them is looking for something else that they do not have in another. This can be compared to a large mosaic or puzzle pieces.

The functions of women and men are so specialized that women have become very different from men. The man personifies power, strength, and intellect, and woman – femininity, weakness, softness, and emotionality. Functional differences gradually altered physiological signs: height, weight, general forms, and the structure of the skull of a man and a woman differ significantly. Isolated from each other, they are only different parts of the same concrete whole.

In a word, the division of labor is the source of marital solidarity. This may seem strange, but it confirms what was said above. Absolute unification of all kinds of activity without the slightest hint of differentiation is impossible for the reason that people are inherently heterogeneous. Thus, the various divisions are absolutely natural and cannot cause contradictions. It is another question if it is a matter of rights infringement, but we are not talking about this now.

And as differentiation of the genders grew, a marriage union developed and strengthened, the duty of matrimonial fidelity was formed.

So, needs of people encourage them to unite for the joint realization of certain goals: reproduction of the human race, creation of material living conditions – housing, clothing, nutrition; satisfaction of the need for children, biological dependence of children on parents.

Can people satisfy this need outside a family? Of course, they can. However, society as a whole, and, therefore, people, its components, are interested in ensuring that these biological needs are carried out within a family. Only by identifying these specific features in the realization of a person's needs in a family environment, we can understand its essence and the sources of its vitality and attractiveness to a person at the same time.

If you are not sure that you will be able to write something similar and continue reasoning in the same manner, you can always turn to professionals from coolessay.net, they can easily help you.

Human groups adapt not only to physical conditions, but also to social relations, norms, and values accepted in society. There is conscious adaptation of a family to social reason. It arises from the desire to satisfy personal needs. As a small group, it connects them with the public interest.

Natural and biological needs of a person to satisfy realization of a family instinct, the desire of a male to dominate, the biological instinct of the child's dependence on a mother – all this creates a clear system of interaction.

In this case, we form a complete picture of the relations of all ranks and orders. A group of united people is the primary source of knowledge about the structure of society as a whole. Subsequently, it will be easier for a child to adjust in society since he or she will already have primary skills of interaction and communication.

A family has great advantages in socialization of a person in comparison with other groups due to a special moral-emotional psychological atmosphere of love, care, respect, and sensitivity. Children who are raised outside such a group have a lower level of emotional and intellectual development. They have inhibited ability to love others, to sympathize and empathize. The first five years in life of a child are especially important since it is precisely in these years that "sensitive peaks" of development occur, the foundations of an individual are laid – memory, intelligence, speech, thinking, emotions, character, and cognitive activity.

A family performs socialization in the most crucial period of life, provides an individual approach to the development of a child, reveals his or her abilities, interests, and needs in time. At this age, a child learns of prohibitions and norms of behavior.

Thanks to the creation of close relations, the law of social heritage comes into force. Children are very similar to their parents by nature, temperament, and style of behavior. Each person has their own atmosphere, cultural environment, and it has the greatest impact on a child.

The effectiveness of parenthood as an institution for socialization of an individual is also ensured by the fact that it is permanent and lasting and continues throughout life.

We will talk about the rest of the functions in the next part of the article.